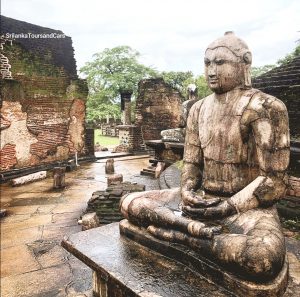 Polonnaruwa was the second capital of Sri Lanka after the destruction of polonnaruwa in 993. It comprises, besides the Brahmanic monuments built by the Cholas, the monumental ruins of the fabulous garden-city created by Parakramabahu I in the 12th century Polonnaruwa was the thriving commercial and religious center of Sri Lanka some 800 years ago. It consists of a lot of temples

Polonnaruwa were slightly weak-willed and rather prone to picking fights within their own court.[citation needed] They also went on to form more intimate matrimonial alliances with stronger South Indian kingdoms until these matrimonial links superseded the local royal lineage. This prompted an invasion by the Aryacakravarti dynasty war load Kalinga Magha in 1214, who saw the complete destruction of the metropolises of Anuradhapura and Polonnaruwa by burning. Kalinga Magha by the time of his defeat had destroyed the Buddhist civilization in north of Sri Lanka

1. OUR CONTRACT
All bookings are made with Kalpak Travel GmbH. By booking a trip with us in writing, by telephone, electronically (online), or in person, you are deemed to have agreed to these Booking Conditions (which constitutes the entire agreement between you and us) and your booking will be accepted by us on this basis. The services to be provided are those referred to in your booking confirmation invoice. It is also the customer’s responsibility upon receipt of an invoice/ a confirmation to check that the information on it is complete and correct. Any inaccuracies must be immediately reported to Kalpak Travel. Costs resulting from a failure to report shall be borne by the customer.

2. VALIDITY
Dates, itineraries and prices are valid from 01 January 2021 until 31 December 2022. Beyond 31 December 2022 dates, itineraries and prices are indicative only.
The booked services are valid only on the dates indicated in the invoice/confirmation.
Validity of flight tickets: Flight tickets are generally valid only for transport on the airlines for which they were purchased. Transfers of bookings to other airlines and changes in itineraries or additional stopovers are no longer possible during the customer’s journey. Flight tickets must be fully used in the booked order. Failure to use certain flight routes may result in the loss of the customer’s right to travel on all booked flights, or in the airline re-invoicing the ticket price. This may be higher than the price of the originally booked flight tickets.

3. DEPOSIT REQUIREMENT
At the time of booking, you are required to pay a non-refundable deposit of CHF500, EUR500, or USD500, as applicable, per person per trip for your booking to be confirmed. If your booking is made within 15 days of the departure date, then the full amount is payable at the time of booking. Please note that a higher deposit may be required for some selected trips.

5. YOUR DETAILS
In order for us to confirm your travel arrangements, you must provide all requested details with the balance of the trip price. Necessary details include full name as per passport, date of birth, nationality, passport number, passport issue, and expiry date, and any pre-existing medical conditions you have which may affect your ability to complete your travel arrangements. Your booking cannot be confirmed without the provision of these details.

6. CANCELLATION BY THE TRAVELLER
If you cancel some or all portions of your booking, cancellation fees will apply. A cancellation will only be effective when we receive written confirmation of the cancellation. If you cancel a trip:
15 days or more prior to departure, we will retain the deposit.
Less than 15 days prior to departure, we will retain 100% paid by you in connection with the booking.
Please note that for certain travel arrangements the cancellation charge may be higher than those shown. In certain cases, a 100% cancellation fee applies as soon as the booking is made and the ticket is issued. You will be advised of different cancellation charges at the time of booking. You are strongly advised to take out cancellation insurance at the time of booking which will cover cancellation fees. If you leave a trip for any reason after it has commenced, we are not obliged to make any refunds for unused services.

If you fail to join a tour, join it after departure, or leave it prior to its completion, no refund will be made. The above cancellation fees are in addition to fees that may be levied by accommodation providers, travel agents or third-party tour and transport operator fees.

7. CANCELLATION BY US
We may cancel a trip at any time up to 30 days before departure, subject to clause 13. We may cancel a trip at any time prior to departure if, due to terrorism, natural disasters, political instability or other external events it is not viable for us to operate the planned itinerary. If we cancel your trip, you can transfer amounts paid to an alternate departure date or alternatively receive a full refund. In circumstances where the cancellation is due to external events outside our reasonable control refunds will be less any unrecoverable costs. We are not responsible for any incidental expenses that you may have incurred as a result of your booking including but not limited to visas, vaccinations, travel insurance excess or non-refundable flights. Please note that different cancellation conditions may apply to some styles of trips, your booking consultant will advise if differences apply.

8. BOOKING AMENDMENTS
If you wish to transfer from one trip to another or transfer your booking to a third party you must notify us at least 40 days prior to the proposed departure date. No charges are applied. If you notify us less than 40 days prior to the proposed departure date the refund policy applicable to cancellations will apply. Transfers to a third party are only permitted where the transferee meets all the requirements in relation to the trip, and transfers to another departure can only be made to a departure within the current validity period.
Amendments to any other arrangements made in conjunction with your trip will incur a EUR50 administration fee per booking per change. This fee is in addition to any charges levied by hotels, ground operators, or airlines. No amendments are permitted to your booking within 10 days of departure.
Any changes in bookings must be requested by the customer in writing.

9. INCLUSIONS
The land price of your trip includes:

international or internal flights unless specified
airport transfers, taxes and excess baggage charges unless specified
meals other than those specified on the website
Visa and passport fees
travel insurance
Optional activities and all personal expenses
11. PRICES & SURCHARGES
Our trip prices are subject to variable and seasonal pricing, both of which are standard practice within the travel industry. This means our trip prices may vary at any time in accordance with demand, market conditions and availability. It is likely that different passengers on the same trip may have been charged different prices. Your best option if you like the price you see is to book at that time. Once you have received a quote the price will be locked in provided you pay the required deposit prior to the quote’s expiry. Any reduced pricing or discounts that may become available after you have paid your deposit will not apply. If you wish to cancel your booking

Much like the ancient city of Angkor in Cambodia, being able to walk relatively freely through the ruins, temples and shrines is an incredible way to take in the history of the country and imagine what it must have been like in its heyday. The ruins of Polonnaruwa were officially inscribed as a UNESCO World Heritage site in 1982.

If you are planning a visit to Sigiriya Rock Fortress, then you must venture over to Polonnaruwa to explore the ancient ruins. Wondering what to know before visiting Polonnaruwa in Sri Lanka? Read on for important visiting tips and the top things to see in the ancient city of Polonnaruwa!

o get to Polonnaruwa I would recommend that you base yourself in Sigiriya: this way, you can climb the giant rock fortress, visit the Dambulla Cave Temple and go on a safari in Minneriya or Kaudulla National Parks. Sigiriya is a 3-hour drive away from Colombo, and Polonnaruwa is only an hour away from Sigiriya by car.

It gets really, really hot in this part of Sri Lanka, so I would not recommend walking if you want to cover the top places to visit in Polonnaruwa. The best way to see the ancient city, especially if you only have 1 day to see it all, is by (air conditioned) car. If you are on a budget, you can rent bicycles to get from site to site. Google Maps is fairly accurate when it comes to the individual sights, or you can grab a map from the ticket office.

The ancient city of Polonnaruwa comprised a citadel (inner city) and an outer city. The citadel had 2 types of buildings – the king’s palace/royal court as well as administration buildings. The outer city contains religious shrines, with the main shrine being the Sacred Quadrangle.

With over 8 years of experience in the travel industry, you can be rest assured that we regularly spend time traveling and experiencing our destinations. We have developed and nurtured partnerships with the best service providers in their fields. Be it, transportation, accommodation, sightseeing, relaxation or adventure, we have you covered.

With over 8 years of experience in the travel industry, you can be rest assured that we regularly spend time traveling and experiencing our destinations. We have developed and nurtured partnerships with the best service providers in their fields. Be it, transportation, accommodation, sightseeing, relaxation or adventure, we have you covered.